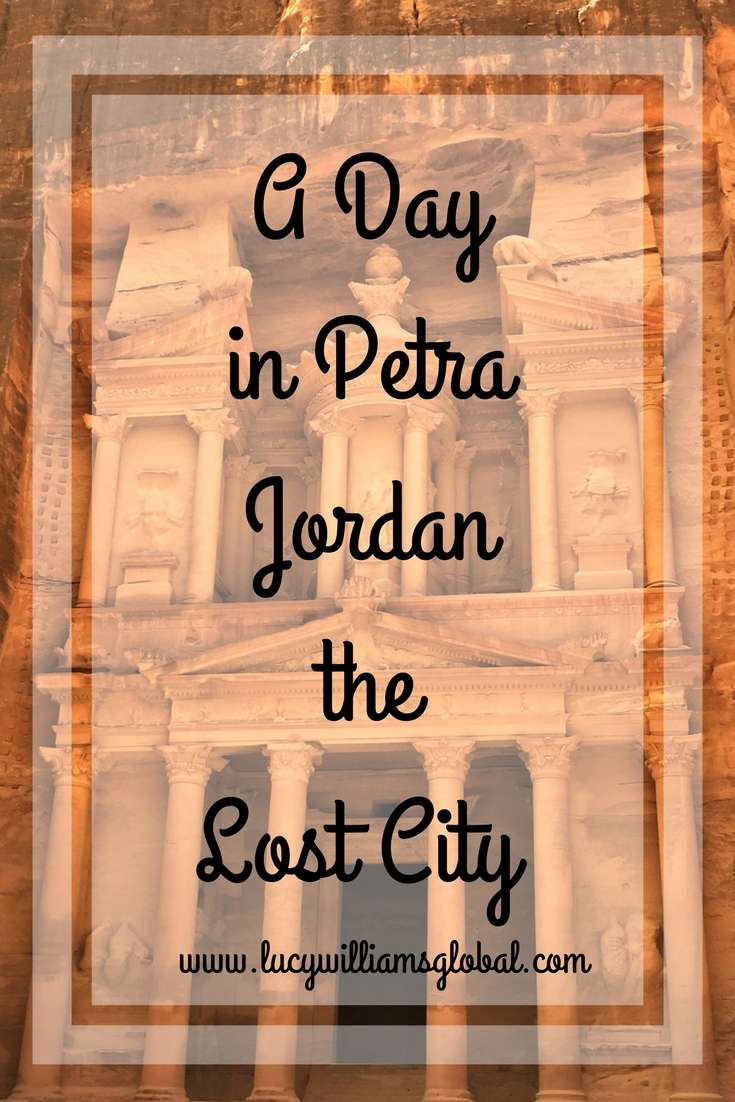 It was a fascinating and tiring day. I walked 10km (6 miles) around the lost city, but it was worth every step I took, even if I ended up with huge blisters on the back of my heels!

We sailed into Aqaba, located at the southernmost tip of Jordan on the Red Sea and it is Jordan’s only seaport. The tour bus drove us from Aqaba through the arid desert to Petra.

It takes two hours to get to Petra and there is nothing but desert and the odd Bedouin tent or the new houses of the Bedouin settlers.

The Bedouin are the travelling people of Jordan, they used to travel from place to place for food and water.

The desert landscape does change though from; sand dunes to sandstone rocks and mountains of wild herbs (chamomile, sage, etc.) growing in the desert. 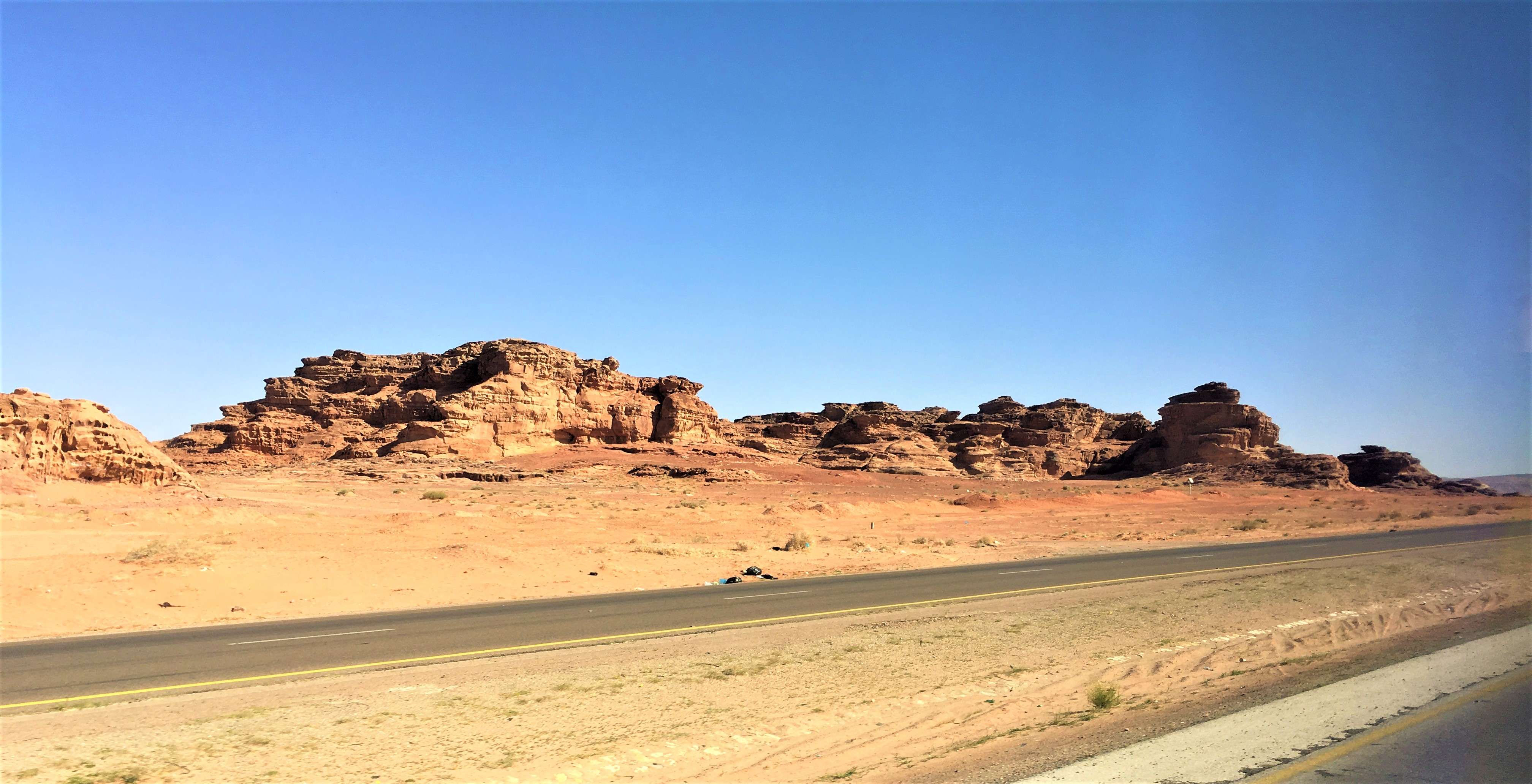 Petra is hidden in the sandstone mountains and is believed to have been built as early as the 312 BC.  The lost city was unknown to the western world until 1812 when the Swiss explorer Johann Ludwig Burckhardt introduced it.

It was only known by the Middle East as Petra was a major trading hub of Arab Nabateans.

As soon as you enter Petra you feel you are in a different time as you walk down the uneven path and see tombs straight away.

The people of Petra believed your second life was better than your first life so you needed a beautiful tomb to be buried in.

The tombs are carved into the sandstone rocks. The first impressive tomb we saw was the Obelisk Tomb and the Bab el-Siq Triclinium from the 25 – 75AD era. 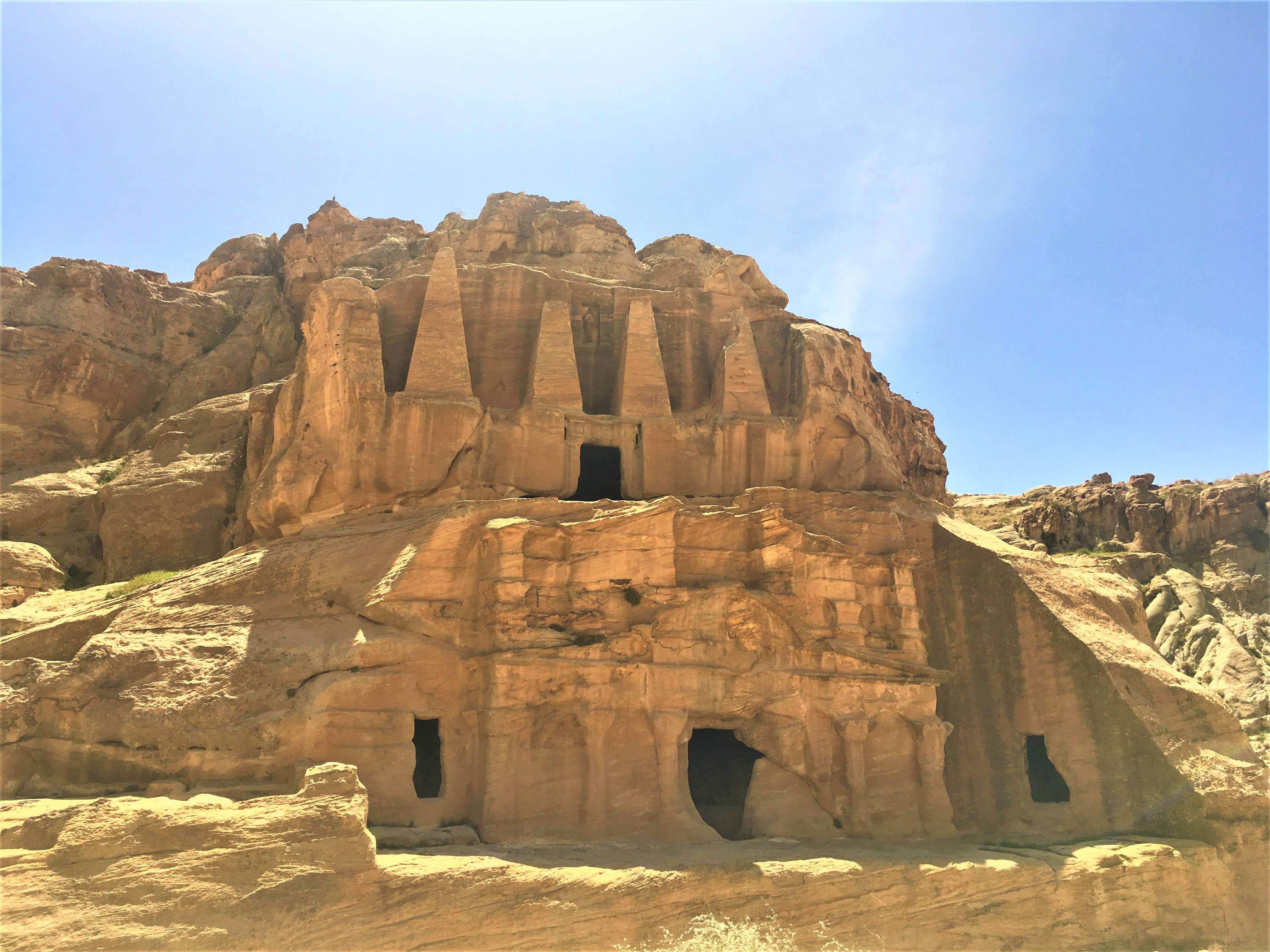 We walked on to the entrance called the ‘The Siq’ which is a natural narrow gorge that winds towards the ancient city of Petra which is around a 2 km (1.2miles) walk.

The Siq is a magnificent sight that is so tall with the sandstone showing off its different shades of colour. The rock is smooth and in some parts, each side is nearly touching the other.

On the way, there are some carvings throughout the Siq and there are the original water pipes on each side of the Siq that carried fresh water to the city from springs. The Nabateans were known for their great ability to construct water collection methods.

Petra was a bustling city that had a constant procession of travellers, visitors and pilgrims, that passed through the Siq.

As you get towards the end of the Siq you can see a glimpse of Al Khazneh which is also called ‘The Treasury’.

Between the two sides of the narrow Siq and you can’t quite believe your eyes how something so old is still standing and has been so well-preserved.

When you get the full view, it is spectacular. It was built-in the 100 AD era. This is the busiest part of Petra as this the most photographed. From this point, you can get a camel ride.

Then Petra gets really interesting as soon as you turn the corner from the Treasury there is tomb, after tomb. Not as in such good condition as the Treasury but still fascinating.

All carved into the sandstone and is still standing, after earthquakes and flooding. They called this area the Streets of Facades from the era of 50 BC – 50 AD. 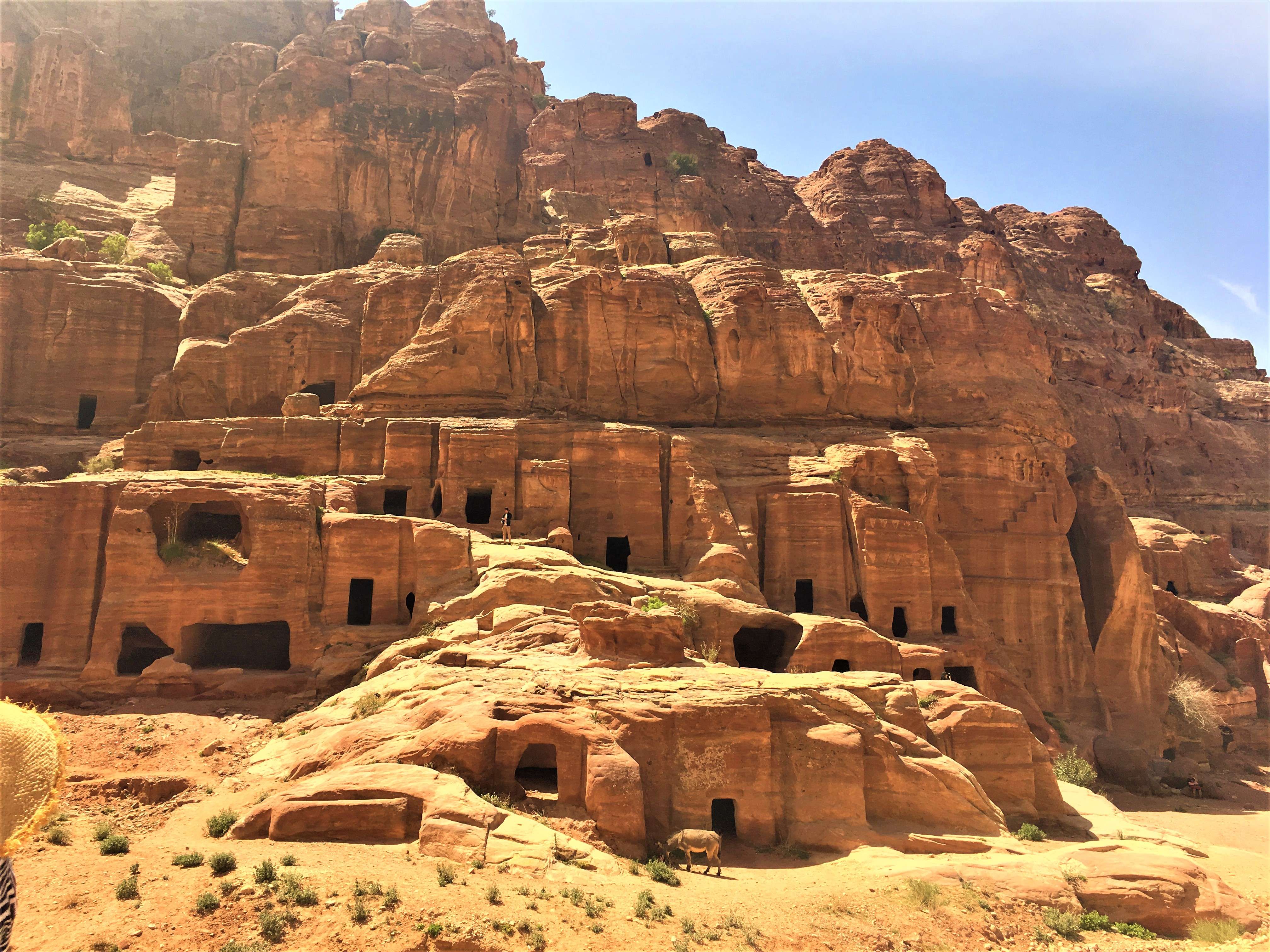 As you keep walking you come to the Main Theatre that is a Roman style that would have seated 6000 people completely carved into the rock from the era of 25 AD – 125 AD. 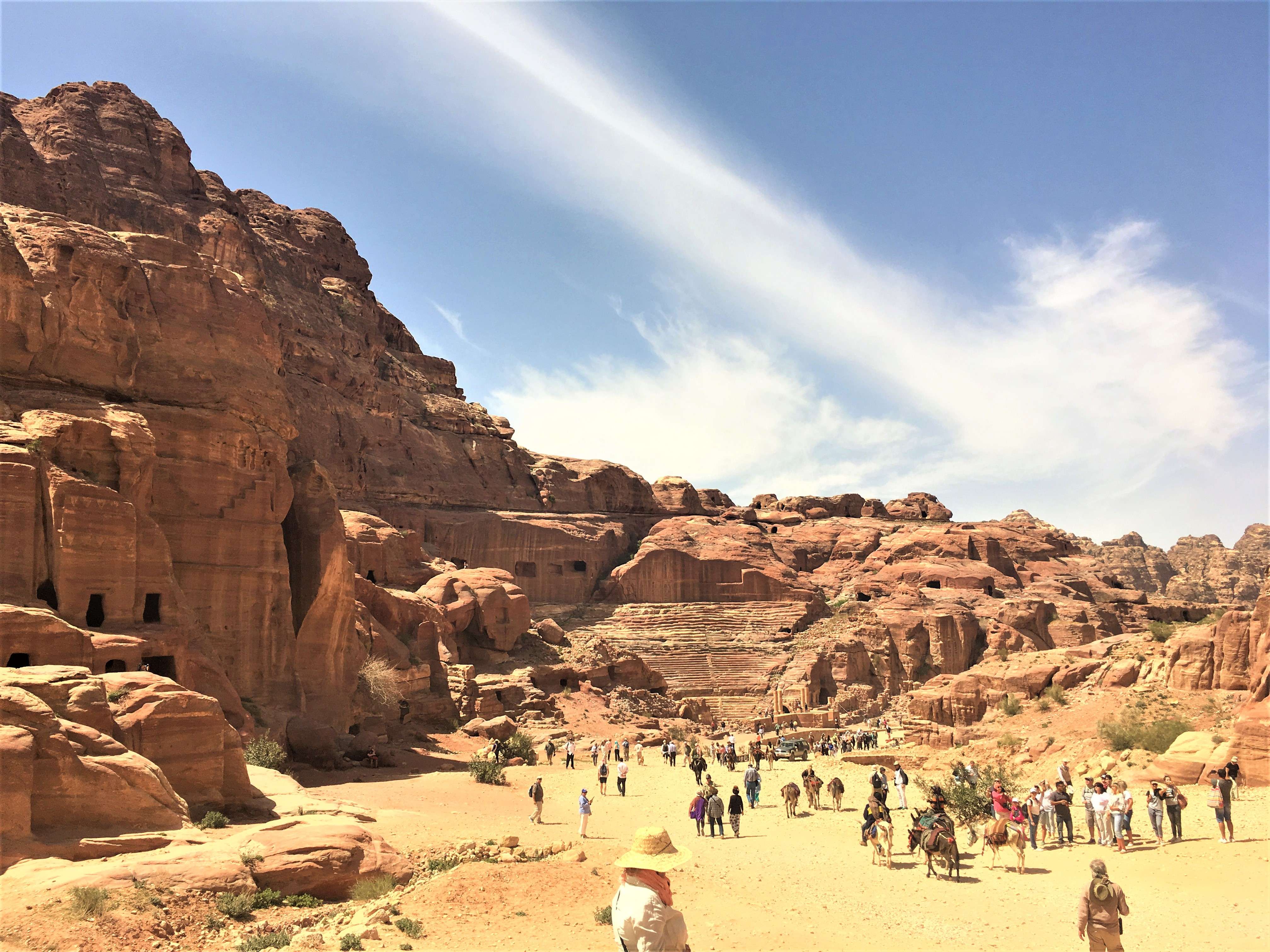 Further along is the Temenos Gate at the entrance of the Colonnaded Street built by the Romans between 100 – 200 AD.

They believe this street may have been lined with houses and the street hosted markets trading goods such as frankincense, myrrh, semi-precious stones, textiles and spices. This part of Petra was badly damaged by an earthquake in 363 AD.

Temenos Gate is an arched entrance to the Qasr al-Bint Temple which is at the end of the Colonnaded Street. Then there are a few more tombs, churches and temples. Archaeologists are continuing to find more in Petra. 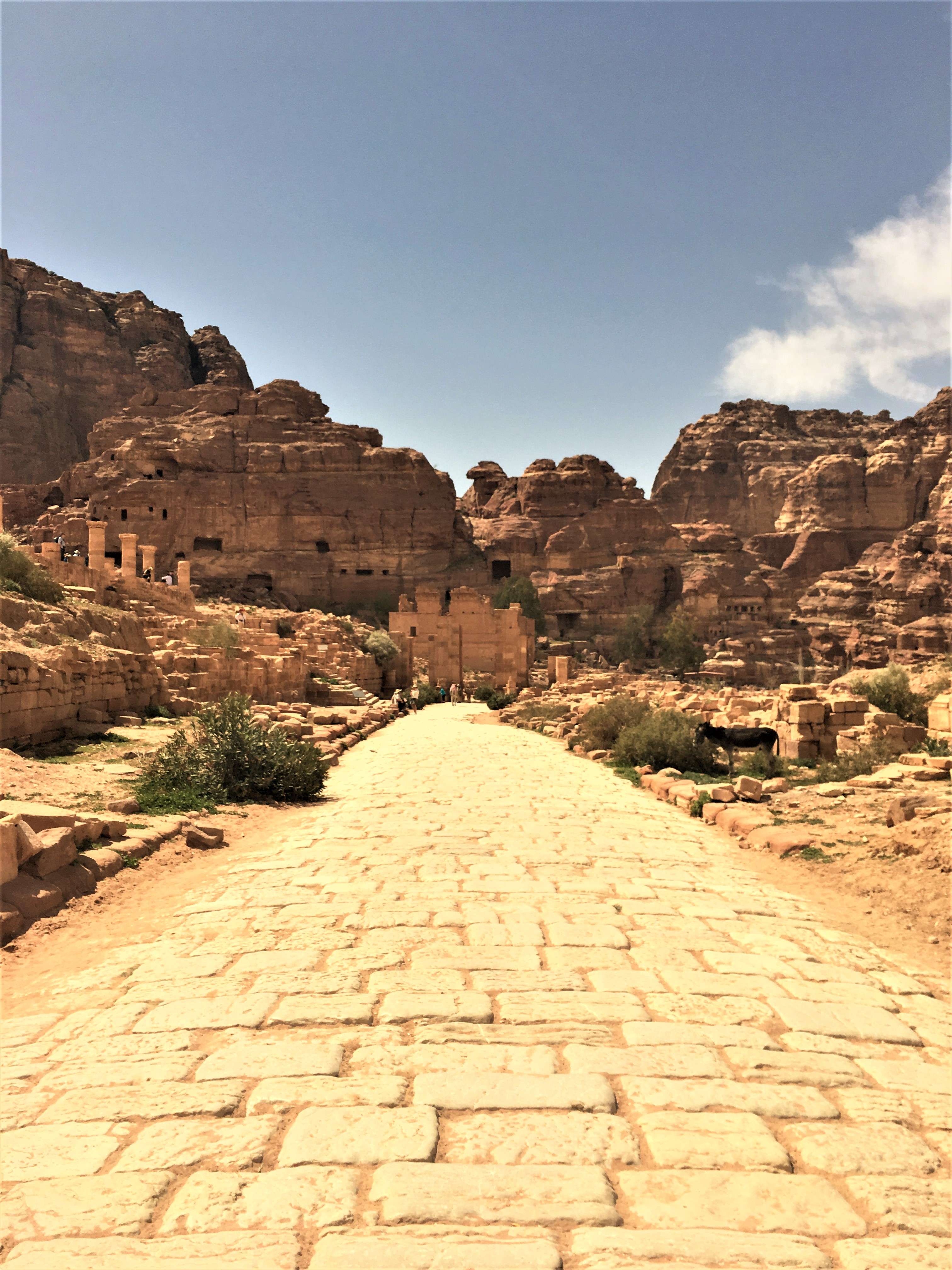 I did not see the whole site as it takes 4 days to see everything and walk along all the trails, but I saw most of it and still walked 10 km around the site.

I recommend if you visit Petra to wear comfortable shoes, such as walking/hiking boots as the surface is uneven. Bring a bottle of water or two as the dry desert is dehydrating and wear long loose-fitting clothing, a scarf and a hat. Wear sunscreen as the sun gets very hot even if the temperature is not that high.

Aqaba has the most pristine coral reefs in the Red Sea so it is a great spot for diving and snorkelling. Just over an hour away you can also visit Wadi Rum which is in the desert and has a beautiful red landscape, soaring peaks and plunging valleys. It is called Valley of the Moon as it is like being on the Moon.

Have you been to Jordan? What did you do? 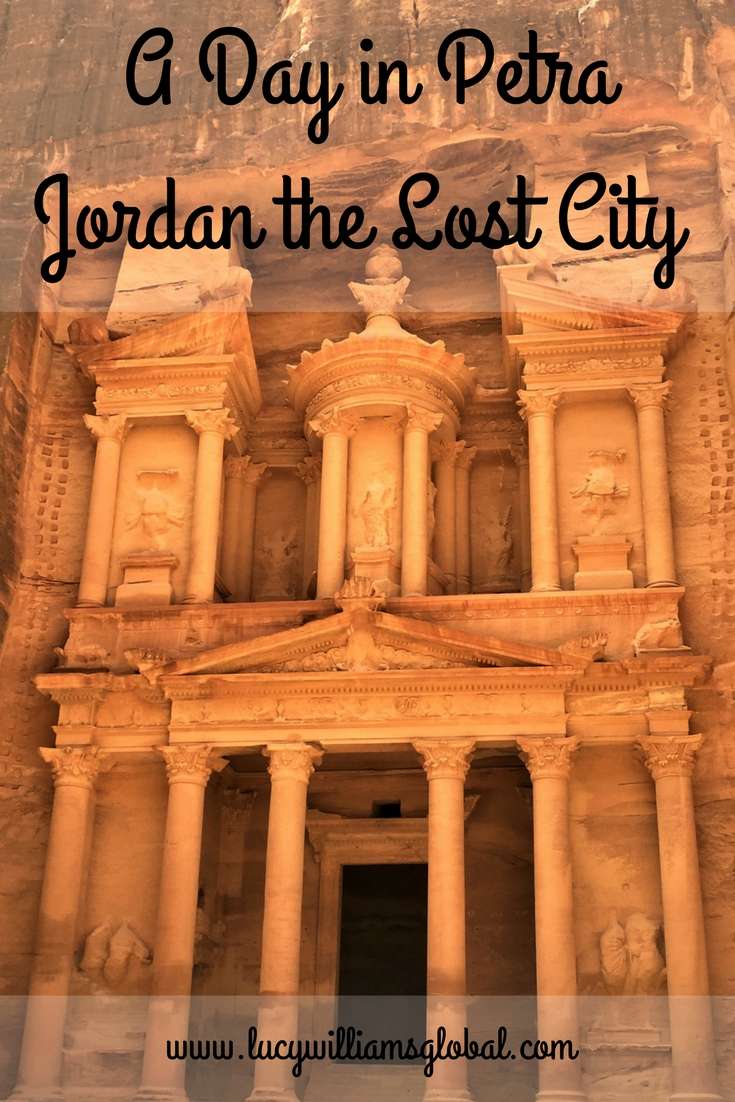 END_OF_DOCUMENT_TOKEN_TO_BE_REPLACED

We are a participant in the Amazon Services LLC Associates Program, an affiliate advertising program designed to provide a means for us to earn fees by linking to Amazon.com and affiliated sites at no extra cost to you. As an Amazon Associate I earn from qualifying purchases.
0   14
2   35
0   40
0   58
0   110
6   64
3   102
4   53
We use cookies on our website to give you the most relevant experience by remembering your preferences and repeat visits. By clicking “Accept”, you consent to the use of ALL the cookies.
Do not sell my personal information.
SettingsAccept
Privacy & Cookies Policy